Leaky Gut in Pets and the Yeast Relationship

Leaky gut syndrome is a very common, yet often undiagnosed condition in which the lining of the small intestine becomes inflamed. This inflammation can be caused by many different things, including the following:

Inflammation causes damage to gut tissue, resulting in excess permeability and unusually large spaces between the cells of the mucosal lining, which allows bacteria, viruses, fungi and other potentially toxic materials to enter the bloodstream. The widened spaces can also allow undigested food particles to “leak” through the intestinal lining. This could pose a serious health risk since these particles may be considered “foreign” by the body and the immune system may try to destroy them.

Leaky-Gut in Pets, and the “Allergy Connection” 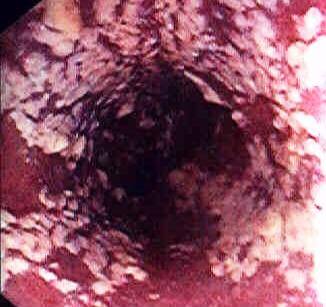 Example of a severe yeast overgrowth

Leaky Gut syndrome is a condition that normally exists alongside a Systemic Yeast Infection, also known as Candidiasis or Candida-Yeast Overgrowth. SYI‘s are most often mistaken initially as an “Allergies” issue – where much subsequent work and testing may be recommended to prove the theory. It is easy to see why the casual observer could come to such a mistaken conclusion. The symptoms and immune system activity certainly seem in-line with allergies. This thought is further advanced when the Veterinarian is indicating the same thing. He may conclude that the pet has primary allergies, with secondary yeast or bacterial infections. This is generally followed by a prescribed round of antibiotics and/or steroids to fight the bacterial infection and lower the inflammation. While this medical approach may give a quick and positive result – by way of immune-response-suppression – it is not long before the symptoms are returning, usually worse than before. Eventually, allergy testing may be recommended. The results of the test will almost always confirm the diagnosis of allergies, with a list of supposed allergens ranging anywhere from environmental to various foods. Armed with these positive test results, it would seem the case for allergies is rock solid, irrefutable, and beyond any further need of “proof”… or is it?

It is the destruction of the “good/friendly” bacteria that leaves the surface of the small intestine unprotected and subject to inflammation and the overtake by fungi. In addition, the ‘opportunistic’ fungal organism known as Candida Albicans (Yeast) will aggressively seek out and adhere to barren tissues recently vacated by the beneficial bacteria (see photo above). Although yeast cannot invade bodily tissue directly the way bacteria and viruses can, like other fungi, it produces root-like structures that penetrate the lining of the gut. This damage provides a site for incompletely digested dietary proteins to enter the bloodstream. The body sees these proteins as antigens and responds by developing an immune reaction to that particular substance. The bottom line is that potentially anything the pet has been eating could produce a positive result on an allergy test. This is the reason that many pets test positive for food allergies, when in reality, the positive result on the allergy panel is only a symptom of a larger issue ~ Leaky gut syndrome and Systemic Yeast.

Let’s submit for a moment to the theory that your pet DOES have allergies. The allergy test has concluded that your pet is allergic to X, Y, or Z proteins or substances. Following this logic, you go out and purchase specialty foods, making certain to avoid all of these suspect ingredients. Perhaps the test results indicated that your pet had a reaction to the more common proteins found in pet foods, like Chicken, Beef, Lamb or Turkey. So you are directed to use foods with rarer forms of protein, like Venison, Buffalo, Rabbit or even Kangaroo. If the problem is indeed allergies, things should start improving rapidly. After all, you are no longer feeding the offensive substances, right? Why is it then that the problem still persists? Why would the pet continue to have allergic reactions when all of the allergens have been removed? Could the answer really be because your pet doesn’t have allergies at all?

OK, now let’s turn the tables. Let’s investigate the possibility that your pet has a Systemic Yeast Infection coupled with Leaky-Gut Syndrome. In the run-up to this point, it is most likely that your pet has had rounds of Antibiotics and/or Steroids. These medications destroy friendly(protective) bacteria, and suppress immune function. This is a ripe condition for Leaky-gut Syndrome. You are feeding a specialty food, with a rarer form of protein. These foods are never meat based, and almost always use a starchy form of carbohydrate like Potato, Sweet Potato, White Rice, or Corn. The protein source is not the problem – the carbohydrate is! Yeast feeds on sugars and starches, causing it to expand and grow. These foods which are meant to “help” your pet, end up actually adding fuel to the fire! Could the REAL reason your pet is not improving be because you’re treating the wrong problem?

One purpose of this section is to demonstrate that Allergy tests can be completely skewed by Leaky-Gut Syndrome, and are unreliable at best in determining the true nature of your pet’s problem. If your pet is plagued with the symptoms of itching, biting, chewing, scratching, hair loss, blackening skin, odor, ear infections, eye infections, urinary tract infections, lethargy, etc; If he’s been on rounds of antibiotics, steroids or antihistamines; If you’re feeding specialty foods, and perhaps even getting antigen shots, YET the problem persists – We submit that you are dealing with a Systemic Yeast Infection/Leaky-Gut Syndrome and not Allergies at all.

The Nzymes 4-Part Approach to Resolution…

To see how this 4-Part approach is accomplished, visit our Healthy-Skin Program Information

Many of the pathogens that make People sick enter the body through the food they eat. This means that an individual with leaky gut syndrome is much more vulnerable to infection than some one with a healthy small intestine. For more on this health issue in People, click HERE 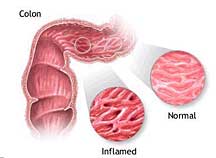 This category represents two different gastrointestinal diseases that are medically grouped together under the heading of idiopathic inflammatory bowel disease. They include Ulcerative Colitis, which affects the large intestine, and Crohn’s Disease, which can affect the entire gastrointestinal tract. Depending upon where Crohn’s disease manifests, it can also be called regional enteritis, terminal ileitis, or granulomatous colitis.

Ulcerative colitis is a severe inflammation of the mucosal lining of the colon. When the condition flares, it can be extremely painful and the individual experiences severe diarrhea. One triggering factor is believed to be infection of the colon with E. coli.

Crohn’s Disease is thought to involve infection with a microorganism known as Mycobacterium Para tuberculosis, although there may be many other causes. Most people with Crohn’s disease suffer gastrointestinal distress, persistent diarrhea and weight loss due to poor absorption of nutrients. These individuals are also much more susceptible to infections in the gastrointestinal tract.

There are several reasons for this:

Sources of Support and Help…
Besides the products in the Nzymes® Healthy-Skin Kits, a quality bovine colostrum product can also be of substantial value in this regard (CALL for more information). As discussed earlier, the immune factors in bovine colostrum contain a number of antibodies that bind to invading microorganisms and hold them in check while they are destroyed by white blood cells. The most important of these antibodies are of the IgA type. Not only do they attach themselves to an invading microorganism but they are also able to stick to tissues, making it easier for white blood cells to destroy the immobilized pathogen. The process of destroying invading microorganisms is aided by other substances present in colostrum. These include lactoferrin and transferrin, which capture the iron required by some bacteria to reproduce. Also, several enzymes in colostrum are capable of eating holes in the walls of various microorganisms.

The growth factors in colostrum are also of substantial benefit in leaky gut syndrome. It is well documented that growth hormone and the IGF super-family of proteins aid in the proliferation of new cells. These and other factors in colostrum can actually help repair the damaged mucosal tissues. Recent studies have documented how the use of bovine colostrum reduces excess permeability caused by the use of NSAIDS (non steroidal anti-inflammatory drugs). The repair of the mucosal lining may also decrease the severity of some food allergies – especially those that are associated with undigested food particles leaking into the bloodstream.

Repairing the intestinal damage caused by leaky gut syndrome can also improve nutrient uptake. Leaky gut syndrome results in significant mineral deficiencies because carrier proteins are damaged by the same inflammatory process that injures the mucosal lining. These carrier proteins are the means by which many of the essential minerals are absorbed. The lactoferrin and transferrin found in high quality colostrum serve as effective carrier proteins for iron and copper. This is why many who have trouble with anemia find help when taking colostrum. In addition, the casein in complete colostrum is a carrier protein for calcium, allowing it to be effectively absorbed. Since the absorption of nutrients is so important to so many functions in the body, the resolution of leaky gut syndrome can have positive effects on many other conditions.

Congratulations on choosing a Healthy Skin Kit!
For even faster results we want to offer you
$5 off your purchase
if you add on a Healthy Skin Shampoo!

Congratulations on choosing a Healthy Skin Kit!
For even faster results we want to offer you
$5 off your purchase
if you add on a Healthy Skin Shampoo!
Add Shampoo and Coupon to Cart
Just the Kit Please!